New FIFA Now involves a coalition of people drawn from fans, players, sponsors and non-sponsors and government around the world who believe that something has to be done about FIFA.It is voluntary; this website, social media and media relations are managed and run voluntarily; we neither seek nor receive any funding from any source. To the extent that costs are incurred (such as meeting room hire, or bottled water for thirsty journalists) they have been met privately or, on occasion, by SKINS, a company owned by one of the co-founders.The co-founders are:Together with MEPs Ivo Belet and Marc Tarabella of Belgium and Emma McClarkin of England, the first steps for #NewFIFANow were taken when a coalition met in Brussels in January 2015 to discuss how real change can happen. The forum was co-hosted by Ivo Belet and Emma McClarkin. The forum was attended by more than 150 people, including media representatives, from Belgium, Denmark, France, Germany, the Netherlands, Nigeria, Switzerland, Tunisia and the UK. A second forum was held in January 2016 to consider progress since the May 2015 arrests in Zurich and to agree on avenues for further advocacy and policy change through advocacy groups and governments.Since its establishment, #NewFIFANow has built collaborations with other organisations including the European Parliament, the Culture Media and Sport Committee of the House of Commons, Avaaz, the International Trade Union Confederation, Playfair Qatar, Transparency International.Most of all, for this movement to work, we need you. And your friends, team mates, colleagues and family.We believe that by uniting on this one big idea – for a new FIFA now – we can make a difference.Please help us get a new FIFA now by signing the petition to show that the fans and players of the world have no confidence in the leadership of FIFA and want to see change.If you wish to get involved in other ways, please don’t hesitate to email us at [email protected]. 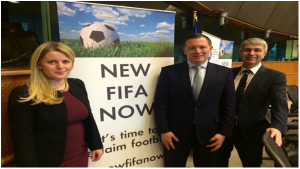